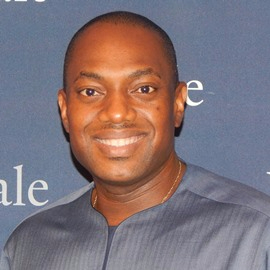 Fela Durotoye is the Chief Executive Officer, GEMSTONE Group, a leadership development institution with a distinct mandate to raise a Generation of leaders that are Empowered, Motivated and Stirred to Operate with Natural Excellence (GEMSTONE). Fela is also the President of the GEMSTONE Nation Builders Foundation, a non-profit, non-governmental organization which engages, empowers and equips nation builders and community transformers.  Perhaps, Fela’s most significant contribution to Nation Building is the Value System which he developed and is currently being endorsed by thousands of Nigerians regardless of gender, tribe, social class or religious biases. The 10 Values have now been articulated into a Personal Creed and is being adopted by individuals, organizations, professional associations and more recently government agencies. The Values Infusion project is a non-governmental effort at reorienting the citizens of a nation and integrating a value system into our nation’s consciousness in recent times. Fela recently founded the GEMSTONE Speakers Network with the aim to raise and train a critical mass of eloquent speakers who have voluntarily committed to facilitate a 1-day Value-Based Leadership training program FREE OF CHARGE in city halls, schools, churches, mosques and corporate institutions across Nigeria. Every one of the speakers trained for free is committed to train 1,000 people. He obtained his Bachelor of Science Degree in Computer Science with Economics, as well as a Master’s degree in Business Administration (M.B.A) and a Master of Philosophy Degree (M.Phil.) in Strategic Management from Obafemi Awolowo University, Ile-Ife. He is an Alumnus of the Kennedy School of Government of the prestigious Harvard University in the United States and an alumnus of The Leadership Institute in Arlington, Virginia also in the United States of America. Fela is widely acclaimed as Nigeria's most sought-after transformational speaker. He has also authored four best-selling books.